Since the “PISA-shock” and the publication of the expertise “Zur Entwicklung nationaler Bildungsstandards” (About the development of national educational standards), the debate about standardization is conducted in all subject didactics. Education shall be steered not only via the input but especially via its output. In the course of this paradigm shift of educational policy, one subject didactic after another is taking over the task to consolidate their preserve in terms of competence theory. A theoretically based competence model that could be taken as a basis for the standardization of its aims is missing for economic education.

Curriculum committees in all federal states were facing the task to define the outcome of economic education in terms of competences and to norm it into shape of standards – especially in those states which have an own subject for this preserve such as Bavaria, Baden-Wuerttemberg, Mecklenburg-West Pomerania and North Rhine-Westphalia (model experiment at secondary schools).

The suggestions made by the German Society for Economic Education (DeGoeB) and others as well as own preliminary work that has been continuative a consortium of economic didactics and economic educators led by Prof. Dr. Thomas Retzmann developed an elaborated model of competences. These are specific for the area of economics as well as certification-oriented educational standards and exemplary tasks.

The educational standards have been developed for four degrees:

These standards derive from an explicit and sophisticated competence model, formulate a medium level and are applicable nationwide for the security of quality of economic education in schools. The comparability with the existing educational standards in other preserves is given. An elaboration that is extensive like this, which is corresponding in content, form and structure with educational standards approved for other subjects by the KMK, is a novelty for the economic preserve.

Contractor: Joint Committee of German Associations in Trade and Industry under the presidency of German Confederation of Skilled Crafts

More information can be found here: 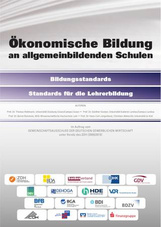